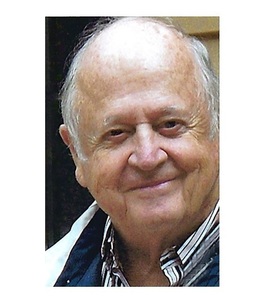 D. Harold Sullivan, 97, of Andover, died peacefully, March 13, 2021, with his loving family at his side. He was born in Lowell, June 2, 1923, the third of five children born to the late James J. and Ellen (Sullivan) Sullivan, who immigrated to Lowell from Ireland. They grew and canned most of their food and his father worked several jobs to make ends meet during the Polio pandemic. Although fluent in Gaelic, English only was spoken and they were very proud to be American.

He was the beloved husband of Eileen L. (Purcell) Sullivan with whom he would have celebrated their 75th wedding anniversary this July 4th. He is survived by two sons; Dennis H. and his wife Florinda of Tewksbury, Daniel E. Sullivan and Jean Ransom of Andover and a daughter; Mary E. Sullivan of Tewksbury, nine grandchildren, more grandchildren on the way, and several nieces, nephews and cousins.

He was a devoted husband and family man. He and Eileen shared everything together. They were the first ones on the dance floor and enjoyed bowling and tennis together. He always had time for his children and was proud of each one. They loved to host the cousin cookout on the fourth of July, and today the cousin party continues many generations later.

D. Harold received his early education in Lowell, went to Keith Academy for two years and then graduated from Lowell High in 1940. The dean at Bradshaw Business school recommend he attend Bentley College of Accounting in Boston. He attended night school and graduated from Bentley University 1946.

Harold had many jobs starting off, the funniest was when he was selling washing machines home to home when they first came out. He started his career as a CPA at Spark, Mann and Co. He was the first Irish person to work for Haskins and Sells, one of the big eight accounting firms at the time, when the sign in the window said ‘Irish need not apply’. He formed the firm of Sullivan, Bille & Company in 1972 and later joined the Demoulas / Market Basket supermarket in 1982 as Financial Vice President and Treasurer.

He served the community as a President of the Board of Governors of the former Saints Memorial Hospital and was a Trustee and later President of the Lowell Boys Club. Harold served on the finance committee at Saint Ann’s Home, St. Margaret’s and St. Augustine’s parishes.

When asked why he gave out so much free advice, he said the people that need you the most are the ones who can’t afford it. One man he helped came back with 10 friends.

He was the Treasurer and then President at Vesper Country Club and was a Trustee and later Trustee Emeritus at Bentley University. As a member of The Indian Ridge Country Club, he often went out at night and played a few holes. He organized and participated in many golf charities, his favorite was working with Father Sannella and the team that put The Immaculate Conception Church Golf Tournament together.

We encourage you to share any memorable photos or stories about D. Harold. All tributes placed on and purchased through this memorial website will remain on in perpetuity for future generations.

Add Photos Post Condolence
M
Class act family, i grew up with john as kids and bounced on trampoline in backyard and rode elevator,lived block away on stevens st, thought we were in hollywood at billionaires house...god bless,markwalsh
MarkzWalsh - Tuesday March 30, 2021 via Condolence Message
Share This:
L
I’m so sorry for the loss of this great man.May your memories of him help you to get through these days ahead.I pray he Rest In Peace with the angels in heaven..My condolences to all of you.

Lorraine Gaudreau Swett
My mom Mary Gaudreau admired and confided in Harold and always spoke in highest regards .
lorrianswett@icloud.com - Thursday March 25, 2021 via Condolence Message
Share This:
KI
On behalf of the McInerney family; I offer our deepest condolences. We hold fond memories of him. D. Harold was a tremendous person; a great community member, trusted professional and a good friend to our family. May he be welcomed in heaven with open arms to find eternal peace. Kristina (McInerney) Ickes
Kristina (McInerney) Ickes - Wednesday March 17, 2021 via Condolence Message
Share This:

We are so sorry for your loss. Your family is in our thoughts and prayers during this difficult time.
Bill Gallagher and SEI Services (Erin's Employer) - Wednesday March 17, 2021 via Heartfelt Sympathies
Share This:

Peace, Prayers and Blessings,
Mim McCaffery - Tuesday March 16, 2021 via Heartfelt Sympathies
Share This:
JJ
Harold Sullivan was a very great and loyal man, and an even greater husband, father and friend. He was also one of the most generous men I have ever known.
One of my fondest memories of Harold came many years ago after several meetings at the Cardinals residence in Brighton where a delegation of the Immaculate Conception Church which included myself, Jimmy Cooney, Frances Demoulas and Ray Rawls among others, met with the Cardinal’s representative in an effort to save the Immaculate from the wrecking ball.
After several meetings we were successful on the condition that we raise the money needed to restore the Immaculate to its former majesty in the city of Lowell.
At that time, our present pastor, Father Hollywood , was planning to retire.and we desperately needed a replacement for him. At that time Nick Sannella had just joined a parish in Wakefield for his first posting after the seminary.
The never shy Ray Rawls, God bless him , shouted out, “We want Sannella!!!..
The rest is history.. The Cardinal agreed and Nick came to the Immaculate.with the assignment to raise money for the church. Lots of money.
The first one Nick sought out for help when he got to Lowell was Harold Sullivan, whom he knew quite well from his days as a very prominent vascular surgeon at the adjacent Saints Memorial campus.
Nick appealed to Harold for help. “What do I do?”, he asked, pleadingly.
Harold told him quite succinctly: “We will give you Indian Ridge for free to run a charity golf tournament!”.
He let that settle in Nick’s head and then shocked him with this: “And let Jack Costello run it”
Now you may not know this but Nick and I were classmates at Boston College graduating in 1967.
You know I never saw him at the library....wherever that was?
Anyway it all turned out great,
The golf tournament has raised well over $2 million for the Immaculate over the past 15 years and are planning another one this year to restore the rectory for Nick’s golden years.
All this because of Harold Sullivan.
May God bless my dear friend.

You were the best Grandpa anyone could have asked for. Thank you for everything you ever did, you will forever remain in our thoughts and hearts.
Love Jason, Desiree & Andrew - Monday March 15, 2021 via Heartfelt Sympathies
Share This:
DS
EILENE YOU AND HAROLD WERE SO SPECIAL YOU WERE AGREAT TEAM -HE WAS THEMOSTTALENTED CPA I EVER SAW- HE TREATED EVERYONE WITHH RESPECT AND WE EARNED SO MUCH FROM HIM--SO SORRY TO HEAR OF HIS PASSING